Business is evil. That’s what many of us think. The logic being business means profits and profits being exploitation of the people. But consider a business which not only gives attractive profits but also empowers the needy people. To top it off, what if the business considers social empowerment as the root purpose of its existence. Sounds illogical right? Welcome to the world of Illogicality. Welcome to ‘Jaipur Rugs’


‘Jaipur Rugs’ is India’s leading manufacturers of handmade carpets.. The success of any business depends to a large extent on its Leadership. That is quite true in Jaipur rugs case too. The company was started by Mr.N.K.Chaudhary in 1978 who had been fascinated with the art of carpet weaving. When he had to make a choice between a bank job and doing something on his own, he choose the latter. He initiated his carpet business with just two looms. Over time he moved to Gujarat where he expanded his business operations in its tribal regions. After staying there for a span of 13 years he returned to Jaipur to launch his independent firm called Jaipur Carpets in 1999. This is a splendid case of being successful in an endeavor which one loves doing.
I recently got a chance to visit ‘Jaipur Rugs’ along with two of my friends Sanjay Dhir and Laxmi Narayanan. We got to see many aspects of the company and also interacted with the company employees and the management team. One thing that stood apart in Jaipur Rugs is the company culture of empowering its employees. Generally in corporate, people are given opportunities or promotions based on their qualifications. It doesn’t take into consideration the person talent/skills nor his interest in doing that activity. Whereas in case of Jaipur rugs, the company believes in a system of promoting people based on their willingness to learn things and their interest in doing new things. A splendid case which was told to us by the HR head Mr.Yadav was that they were looking to recruit someone for the role of receptionist whose responsibilities included attending the calls and receiving the company visitors. Many qualified individuals with good degree had failed to do the work properly. The company has a dedicated canteen for its employees which had an employee who had studied up to 8th standard only and had been doing cleaning stuff. Mr.Yadav had observed that he had been good in dealing with people coming to canteen and had been managing it pretty well without any issues. He believed that given some training, the person can do the receptionist role too. So, the person was given some training and now, he is doing the receptionist role pretty well. The company has many examples like that.
Another example is that of a young MBA graduate Miss.Shikha who had joined the company as a Human resource person. During her course of work, she showed active interest in other work such as the production department as she found that interesting. Mr.Chaudhary called her and asked her to focus completely on production department. In 6 months, she is leading the Production department with few colleagues. This unique philosophy of believing in the employee and giving them the opportunity to prove themselves is something which keeps the Jaipur rugs team united as a whole. 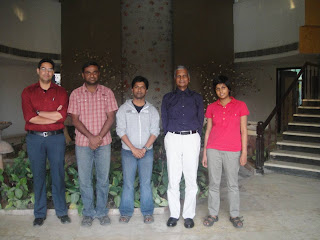 Another aspect of the company which stood out prominently is the fact that the company as a whole believes in the values propagated by the management team. We had talked with few of the managers of different departments and each one of them echoed similar sentiments about working in Jaipur Rugs and the culture that existed there. I guess that would be a dream come true for many companies to have its employee believe in its values and work accordingly. The reality is that not many employees actually do that. The management team spends humongous amount of time in trying to convey their vision to its employees. In case of Jaipur Rugs, it has been able to successfully propagate its vision to its employees. I believe that the secret has been the “top management actions’. It is said that Actions speaks louder than words. It is very true for Jaipur rugs. The top management acts as per what it says, may it be recruitment, promotion, dealing with suppliers or buyers. It stays true to its said vision. Hence, it becomes easy for the company employees to understand and imbibe the company philosophy easily.
The final aspect of the company which stands apart is regarding its vision for the society. The company had been at the fore-front of empowering the rural artisans and enables them to live a better life. In the current age, when corporate social responsibility has become a norm, Jaipur Rugs started implementing CSR during its initial days itself. Early in 2000, the company founded Jaipur Rugs Foundation in order to improve the livelihoods of the artisans, and educate them of the market conditions and help them earn a better wage for their work. In the process, the company creates a win-win situation for itself as well as for the artisans. The company is currently undertaking steps to enable the artisans to become self sustaining entrepreneurs.
Overall, we had a very good experience of visiting Jaipur Rugs. We learnt a lot about carpet industry, carpet making process etc… Did you know that a carpet undergoes around 96 processes before it is ready for shipment. So not only, we had a good learning about carpets from Jaipur Rugs, we also got to know a company which creates wealth with the exception of people but with the inclusion of people, its employees and the artisans…
Posted by Prashant Sree
Email ThisBlogThis!Share to TwitterShare to FacebookShare to Pinterest
Labels: Carpets, Jaipur Carpets, Jaipur Rugs, N.K.Chaudhary

I liked the part about moving employees to the department that suits them/ they like. Its a rarity alright :)

@DI: Rightly said, Destination Infinity... The corporate culture needs to change and shed away its narrow mindset ! Glad to see you after a long time... How r things? :)

Prashant Sree
A Peaceful Warrior in a quest for self discovery...